You are here:
Health Benefits 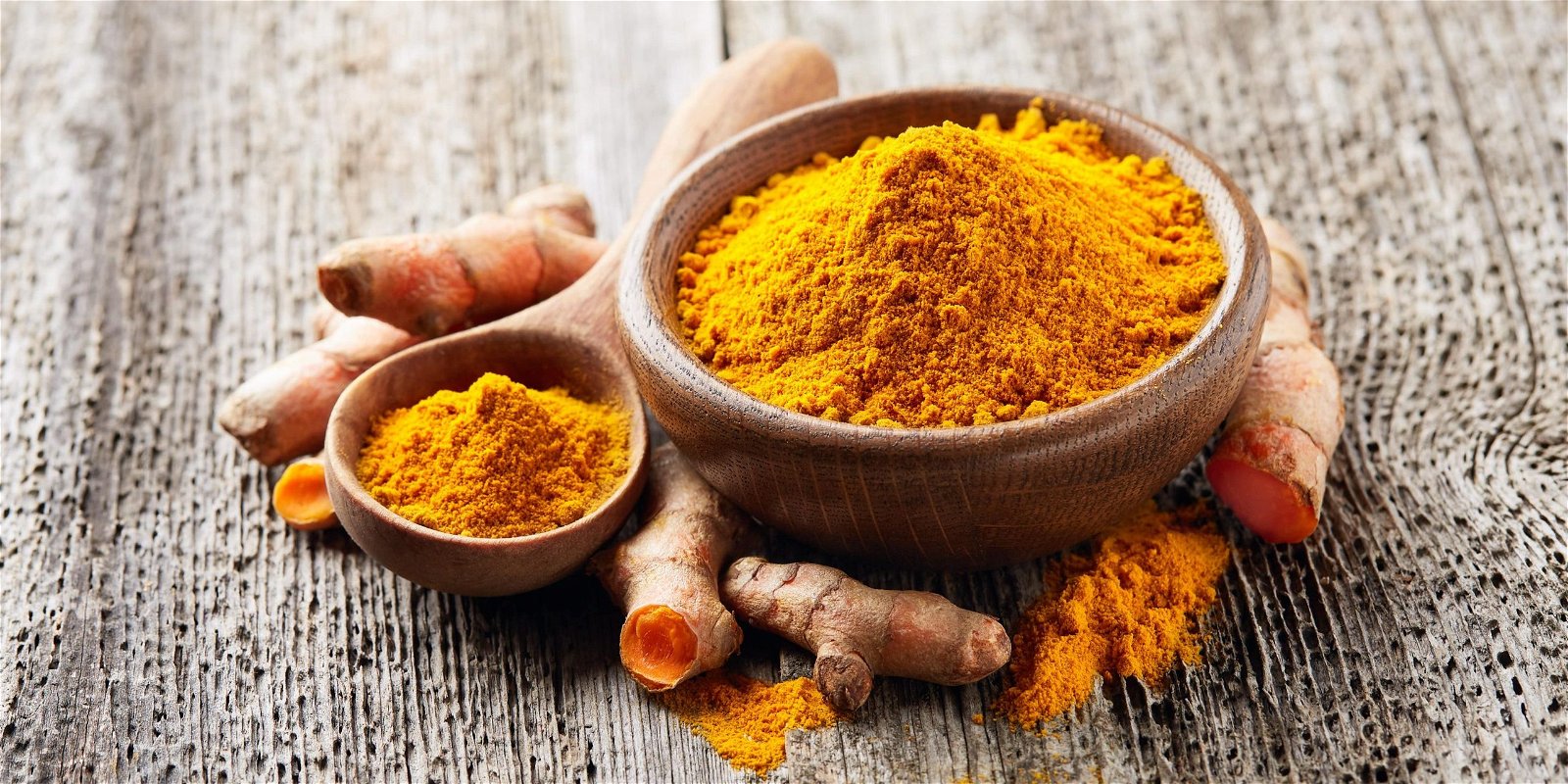 Turmeric in English or Haridra in Sanskrit, Haldi in Hindi, Manjal in Tamil is a condiment used extensively in Indian and Middle Eastern cooking. It is known for its medicinal properties among people residing in Southeast Asia and Middle Eastern countries. It also finds mention in several ancient scriptures written by scholars of Ayurveda.

The popularity has spread quickly to the western world, where people are experiencing its benefits.

How Is Turmeric Procured? 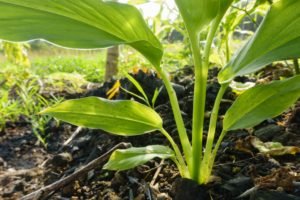 A plant belonging to the same botanical family as ginger produces turmeric. Known as Curcuma longa among botanists, the turmeric plant is classified as a herb and bears flowers all year long. The plant part with maximum uses and benefits is the rhizome (a modified form of the root). The rhizome closely resembles and can often be confused for ginger.

However, unlike ginger, the rhizome bears a distinct orange color from within and has a bitter after-taste. The rhizome, its juice, or powder have medicinal properties.

Which Parts Of The World Produce Turmeric?

It thrives best under tropical weather conditions. India, Sri Lanka, Java Islands, Brazil, Peru, and tropical forests of Australia and Africa are known for their turmeric plantation. India is the single largest manufacturer and exporter. Sandy or clay-like soil is best suited for growth. An above-average rainfall, combined with humid and warm weather, is conducive to the development of turmeric.

What Are its Medicinal Properties?

It has gained much popularity as a herb with numerous medicinal properties. Why has turmeric gained such popularity? What is the reason for its use in traditional as well as modern medicine? Let us find out.

Here are some of the health benefits of turmeric:

Indian mothers use it freely when their little ones scrape a knee or get skin abrasions. The powder applied to an open wound will prevent sepsis and accelerate skin healing. It is an excellent antibacterial and antiseptic agent. Oral consumption is also beneficial for treating infection of the digestive system.

Turmeric is a powerful antioxidant due to which it prevents the accumulation of toxins within the liver. The anti-inflammatory effect allows an irritated liver to heal quickly. Regular consumption will avoid infections of the liver and keep viral jaundice at bay.

Oxidation is the physiological process that causes cells in the body to degenerate and prevents healing. Turmeric is a potent antioxidant and keeps several systemic disorders like diabetes, auto-immune diseases, and psychological disturbances.

Has an antioxidant and anti-inflammatory effect on the heart.

These properties have a preventive and therapeutic action. Turmeric helps in the purification of blood and prevents the formation of blood clots.

Turmeric should be consumed in a particular way to maximize its medicinal effects. And for that, it is essential to consult an Ayurvedic physician or a doctor who has adequate medicinal knowledge. If consumed the wrong way, not only will turmeric fail to have the desired therapeutic effects, but it can also cause some side effects.

Why Is Turmeric Highly Mentioned In Ayurvedic Scriptures? 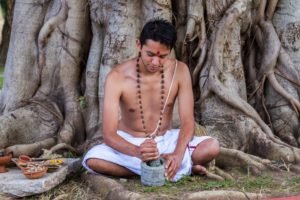 Medicines prescribed by Ayurvedic physicians have a herbal or plant base most of the time. Several books written on Ayurveda mention the medicinal properties of turmeric. Ayurveda teaches that the three abstract doshas or forms of energy that govern the human body are Vata, Pitta, and Kafa. It is known to have a beneficial action when the Vata dosha malfunctions. Vata Dosha causes Ama’s (toxic waste remaining after digestion) accumulation in the blood. Ayurveda says that turmeric will distribute body heat equally and restore the Vata to its former capacity.

Kalmegh is another herb, having numerous medicinal properties. You will find information about Kalmegh in several Ayurvedic scriptures.

Which Are The Best Ways To Consume Turmeric?

Every remedy is beneficial only when consumed or used in a specific manner. Similarly, the medicinal properties of turmeric are evident with correct usage only. Here are some ways to use it.

Turmeric powder is a staple ingredient in Indian and Middle Eastern cooking. Regular consumption via daily meals is an excellent way to experience its health benefits. The powder is applied directly over wounds, burns, skin rash, and other skin ailments. If mixed with warm milk is an excellent remedy to treat throat infections.

An infusion of turmeric with honey added to it is one of the best and fast-acting remedies for the common cold and cough. It also acts as a digestive tonic and prevents bloating. Half a teaspoon of turmeric and 1-2 teaspoons of honey mixed in warm water make for a tasty health drink.

Extract of turmeric in liquid form is available in many pharmacies. Its direct consumption is not advisable owing to its prominent bitter taste. Dilute turmeric extract in water to subdue its bitter taste. Consume 1-2 glasses of prepared water daily for good health.

Turmeric tablets that can be directly chewed or swallowed with water are available in pharmacies. It is advisable to consult with a physician to understand the dosage of these tablets.

Turmeric is part of face washes, face packs, facial treatments, beauty masks, and much more. It helps to eliminate blemishes, acne, skin rash and leave a glowing and fresh complexion.

How Did Turmeric Derive The Name ‘Yellow Gold’?

Turmeric is an integral part of the food culture in Southeast Asia and the Middle East. It is used mainly for the rich yellow color and a distinct flavor when added to food. Curries, rice dishes, parathas (a type of Indian flatbread), desserts, soups are just some foods that get a delicious appearance because of it. It is also used as part of marinades for fish and various meats.

This eye-catching color imparted is due to a specific orange-yellow color of Curcuminoid present in the rhizome. This bright shade of yellow color imparted has led to the coining of the term ‘yellow gold’ This characteristic yellow color also makes it a suitable ingredient in preparing dyes.

Turmeric has significant importance in certain religious ceremonies and traditions among several cultures.

The Importance Of Turmeric In Indian Marriages 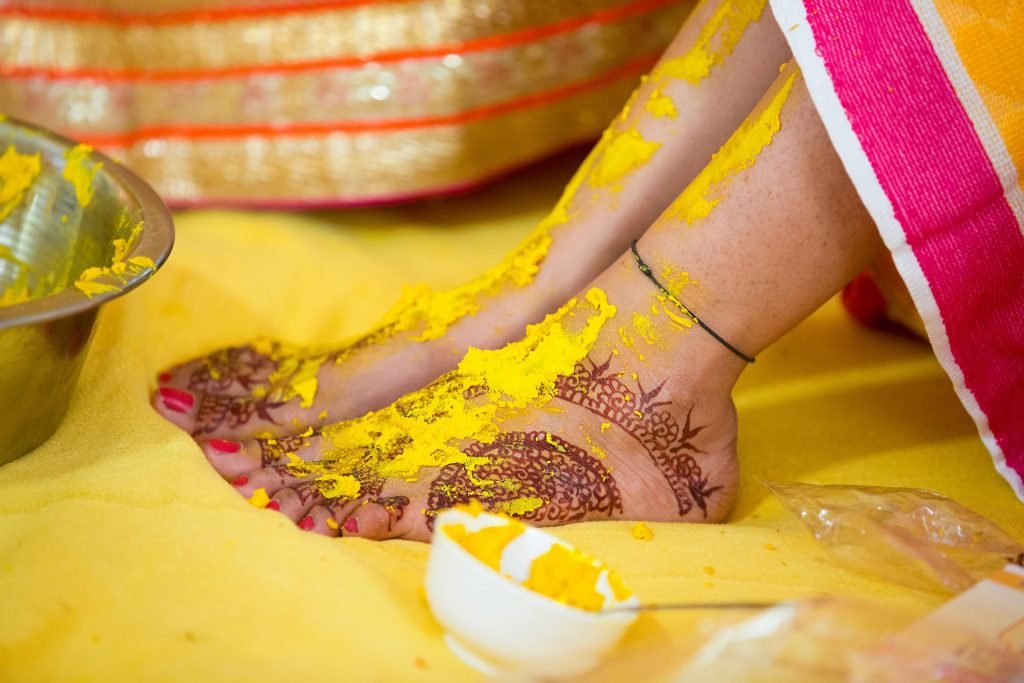 Anybody who has been part of the extravagant Indian weddings has attended the ‘Haldi’ ceremony. Haldi is a common term for turmeric in several Indian languages.

A traditional ritual among Hindu and Muslim weddings involves applying Haldi paste to the bride-to-be and groom-to-be. There are several reasons behind this custom. It is known to have a cleansing effect on the skin, giving it the much-desired festive glow important for the wedding day. The yellow color of turmeric is considered auspicious and is supposed to bring good fortune to the newlyweds. The powder is often mixed with milk, sandalwood powder, and coconut oil to form the paste used during the Haldi ceremony.

Many Indian communities have a wedding ritual during which a piece of dried turmeric rhizome is tied on the bride’s and groom’s wrist with a white or red thread. This ritual prevents anyone from casting an evil eye on the newlywed couple and strengthens the marital bond.

The rhizome is often used entirely in an unprocessed form in cooking. The second most abundantly used form is in its powdered state.

How Is Turmeric Powder Prepared?

Here is the simple yet time-consuming process of making turmeric powder:

While the western world is yet to embrace turmeric as part of their daily lives, this herb has made a permanent spot for itself in the kitchens of several Asian and Middle Eastern homes. People residing in the eastern world consume it almost daily through their diet.

Is Regular Consumption Of Turmeric Safe?

Since wrong consumption or over-consumption of turmeric produces specific side effects, it is natural to wonder whether daily consumption is safe.

However, effects and side effects depend entirely on the amount of turmeric consumed at a time and the person consuming it.

It is safe for consumption by people of all age groups barring babies below six months of age. However, the quantity of turmeric consumed by kids should be far less than that of adults. About one-quarter of a teaspoon of turmeric powder is safe for daily consumption.

It is like that unsung hero who remains unappreciated despite putting in tremendous efforts for a good cause. However, its popularity is soaring due to its various medicinal properties and will continue to rise.

Welcome turmeric into your kitchen for a plateful of yummy food and heaps of good health!