How Does Meditation Affect Your Chakras?

You are here:
ChakrasSantosh Yoga Institute 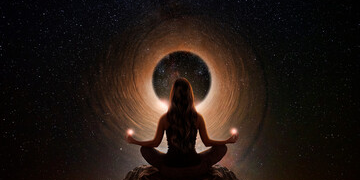 Chakras are intangible, spinning wheels of energy that channel the subtle life force throughout the body. They are an invisible force that constantly works to bring harmony across health’s physical, mental, and spiritual planes. Therefore, unbalanced chakras can disturb the state of coordination of human health.

Exercise is not a luxury but an important life choice to maintain good health. Physical exercise shapes one’s body, and constructive activities stimulate one’s mind to develop. Similarly, the chakras need some action to keep them open and aligned with one another. Yoga provides the perfect workout, in the form of physical asanas and meditation, to maintain the functions of the chakras.

Yoga is an ancient holistic discipline of life that originated in India. Ancient Indian scriptures written in the Sanskrit language explain the connection between chakras and Yoga. Religious Hindu scriptures like the Vedas were the first to mention Chakras. The Vedas describe the Chakras to bear a resemblance to a lotus that has numerous petals. Each petal of the Chakra resonates with the sound vibrations of specific syllables of the Sanskrit language. Meditation and chanting create the necessary vibrations that correspond with the chakras’ vibrations and open them.

How To Open Your Chakras With Meditation

Meditation is a gradual process that begins in calm and serene surroundings and culminates with a surge in one’s internal energy levels. People meditate for good health, to achieve personal goals, or to focus on their spiritual well-being. Meditation is a great way to open and align the seven chakras of the body with one another. The steps for meditation remain the same, but one may augment the effects of meditation by defining their objective and focusing on their goals.

Meditation focuses on your goals while allowing your body and mind to relax. It would help if you were in quiet and pleasant surroundings while you meditate. A brightly lit corner of your apartment, your favorite spot on your patio, or a quiet corner in your backyard could be the perfect place for you to meditate.

A fruitful meditation session can last between 20-60 minutes; however, you may meditate longer if you wish to. Repeated practice of meditation to open your chakras will allow you to understand yourself better. As you gain expertise in chakra meditation, you can expertly deduce the opening and alignment of each chakra.

The Best Mantras For Chakra Meditation

Mantra is a word of spiritual or religious importance that people repeat while they meditate. It is usually a single syllable or a short collection of syllables with strong pronunciation. Hindu and Buddhist religious teachings believe that mantras are potent enough to evoke spiritual powers that can change a person’s life course.

As mentioned earlier in the article, the Vedas describe the chakras as lotus-shaped wheels of energy that resonate with the vibrations of specific Sanskrit language syllables.

Let us get to know the mantras to which the chakras respond in the best manner.

The Sanskrit mantra best suited to open and align the root chakra is ‘Lam.’

The Sacral Chakra responds best when stimulated with the pronunciation of the syllable ‘Vam.’

Begin your meditation session by chanting the syllable ‘Yam’ to open your heart Chakra.

You can open and align your throat Chakra by chanting the syllable ‘Ham.’

The third eye chakra resonates with the vibrations generated by chanting the syllable ‘Om’ while you meditate.

The final syllable one must remember during chakra meditation is ‘So-Ham.’ This joint syllable is closely associated with the opening and alignment of the crown chakra.

The seemingly simple syllables are, in fact, very powerful and are known as Beej Mantras. (CLICK HERE to learn the concept of Beej mantras).

Beej mantras can evoke great spiritual powers within a person. Chanting the Beej mantras requires great precision, as they require clear pronunciation. One must practice several mantras to become familiar with their meaning and importance. The Beej mantras can generate vibrations that eventually open and align the chakras. Therefore, people are strongly advised to learn the Beej mantras under professional guidance.

There are various guided chakra meditation sessions available across several online platforms. But for the best results, it is advisable to contact a certified Yoga teacher and learn chakra meditation techniques under professional guidance.

Meditation and Yoga are influential in shaping a person’s health and well-being. While chakra meditation primarily focuses on the seven chakras of the body, it also serves other health benefits. Along with its invaluable contribution to a person’s spiritual growth, chakra meditation significantly influences their physical and mental health.

Chakra meditation maintains harmony between health’s spiritual, physical, and mental planes. Many conditions of poor health respond miraculously to chakra meditation. However, one must note that chakra meditation is not a substitute for any mainstream medical or surgical treatment. More severe diseases, including structural damage to any organ, may not be treated with chakra meditation.

Chakra meditation is like a health tonic that one may include in their daily routine to enjoy a fulfilling life!

How Yoga Helps Increase Productivity In The Workplace
January 5, 2023