Yoga Mudras And Their Impact On Health 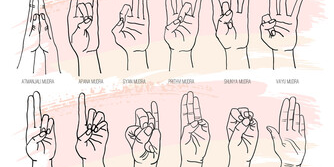 As we acquaint ourselves with Yoga and explore its treasures, let us get acquainted with one more concept of Yoga, the mudras. Mudra is a Sanskrit language word having multiple meanings. The word could mean a hand or facial gesture. Yoga mudras are simple, subtle hand gestures that affect people’s health and well-being.

Ancient Hindu scriptures on religion, Yoga, and Ayurveda state that intangible and subtle energy flows through the body. The energy is known as prana, which powers human health’s physical, mental, and spiritual planes. Our lifestyle, diet, exercise routine, and state of well-being determine the flow of prana through each cell of the human body. Yogic Mudras are an excellent means to stimulate and govern the functions of prana.

Yoga Mudras are crucial in opening and aligning your chakras. (CLICK HERE to know more about chakras)

Let us get to know some Yoga Mudras and their significance in building a healthy mind and body.

Mudras have been an integral part of Indian culture since time immemorial. Mudras have been used extensively during Yoga, dance, and traditional rituals. Some religious scriptures that there are as many as 399 different mudras used since ancient times.

Below are a few simple Yoga mudras that you may include in your daily exercise routine.

The Gyan Mudra is widely used in Yoga, meditation practices, and various dance forms. Gyan means knowledge. Monks and sages used the Gyan Mudra to increase their mental concentration, which helped them to focus better and gain more understanding.

How To Perform Gyan Mudra

One uses their forefinger and thumb, representing the Air and Fire elements of nature, respectively, while performing the Gyan Mudra. The Mudra symbolizes the union of an individual’s soul with the cosmic Universe.

Prithvi, or Mother Earth, is a symbol of balance and stability. The Prithvi Mudra restores spiritual balance in a person’s life. The mudra significantly contributes to the body’s natural ability to heal and restore physiological balance.

How To Perform Prithvi Mudra

Ancient Hindu and Buddhist scriptures teach that the five elements of nature, earth, fire, air, water, and space, influence a person’s physiological functions. An imbalance between either of these elements will lead to ill health. The Prithvi Mudra balances the effect of the Earth element on a person’s health and restores a sense of stability and self-confidence.

Yoga teachings and philosophy believe in the presence of a subtle life force that enlivens the human body, mind, and spirit. Yoga scholars refer to this life force as Prana. The Prana Mudra is a Yoga Mudra that stimulates, controls, and nurtures the life force of Prana.

How To Perform Prana Mudra

The Prana Mudra acts like a breath of fresh air after a particularly tiring day and provides a much-needed energy boost. According to the principles of Ayurveda, the little finger, ring finger, and the thumb represent Jala (water), Prithvi (Earth), and Agni (fire), which are three out of the five elements of nature. Performing the Prana Mudra balances the effect that the elements mentioned above of nature have on a person’s health.

How To Perform Varun Mudra

The Varun Mudra significantly improves the functions of the digestive tract, kidneys, reproductive system, and skin. Performing the Varun Mudra with both hands balances and stabilizes one’s physical health.

The word Shoonya stands for the numerical figure zero; it may also imply nothingness or a void. True to its name, the Shoonya Mudra helps to create emptiness by reducing the effect of the Space element on human health. Therefore, the Shoonya Mudra is also known as the Akash Shamak Mudra, which means the ‘Mudra which reduces space .’ Space is one of the five elements of nature and is present in every hollow of every cell of the human body. The Shoonya Mudra stimulates the space element’s balance and heals various functional disorders.

How To Perform Shoonya Mudra

Several other Mudras affect the elements of nature and have numerous health benefits. The Mudras also play a pivotal role in opening and aligning the chakras.

Ancient Yogic literature mentions hundreds of Mudras and elaborates on their benefits. Each Mudra affects different aspects of human health and enhances one’s wellbeing. You may follow the tips below to get the best results while practicing Mudras.

In the bygone era, monks meditated in various Yoga Mudras for spiritual progress. Religious teachings of Jainism, Hinduism, and Buddhism strongly believe in the powers of Mudras. Several Yoga Mudras activate dormant energies that invoke spiritual powers within a person. Mudras are accredited for being a catalyst in achieving the one true goal; the union of an individual soul with the forces of the cosmic Universe. Sages and hermits with excellent spiritual knowledge often sat meditating in a Yoga Mudra for months or even years before they attained spiritual enlightenment.

Fast forward to the present, and the powers of Mudras are as relevant as they were centuries ago. Mudras help strike a balance between the mental, spiritual, and physical planes of well-being, thus allowing people to be happy and healthy.