Did You Know These Fascinating Facts About Sandalwood?

You are here:
SandalwoodSantosh Yoga Institute 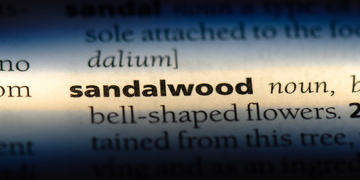 Sandalwood, or Chandana, is a type of wood found in a tree’s bark, stems, and trunk with the same name. Sandalwood is highly sought after and relatively expensive due to its heavenly scent. Owning products made of Chandan is considered a symbol of wealth due to its high prices. This blog attempts to learn more about Chandan and its historical and spiritual importance.

The Botany Of Sandalwood

Sandalwood, which has garnered global popularity for its exotic fragrance, goes by the botanical name of the Santalum album. A member of the Santalacea family, Chandana is a hemiparasitic tree, which implies that it partially depends on a neighboring tree to fulfill its nutritional needs. Santalum album goes by various vernacular names like Sandanam, Srikhanda, Candanam, and Tella Chandanam.

Sandalwood trees are native to tropical parts of India, the Malay Peninsula, Indonesia, and some regions of Australia. Ancient incense trade routes dating back to 1 B.C. connected the Eastern world with the Mediterranean region. Sandalwood became available in Egypt, China, Arabic countries, and parts of Africa.

Santalum album, the most significant source of superior quality sandalwood, is found only in South Asia, specifically in the southern states of India. Australian Sandalwood also belongs to the Santalacea family, but it is botanically different from the Santalum album. Aromatherapy experts and perfume manufacturers prefer using Australian sandalwood, or Santalum spicatum, due to its reliable sources.

However, Indian Sandalwood, as the Santalum album is known, enjoys more popularity and has varied uses. Sandalwood has always been in great demand for its medicinal properties, importance in religious ceremonies, and subtle connection with spirituality.

Ayurveda is one of the oldest forms of traditional medicine that originated centuries ago in India. Detailed research has led to the unearthing of massive literature on various subjects regarding Ayurvedic medicine. The use of natural healing techniques, herbal remedies, different methods of detoxification, and holistic treatment of illnesses form the basis for this ancient branch of medicine. Ayurvedic literature mentions several uses of Sandalwood as an effective remedy to treat many health disorders.

Sandalwood decreases the body’s natural inflammatory response by altering the signals transmitted between the skin cells and their nerve endings. Inflammatory disorders of the urinary tract, gut, sexual organs, and muscles can be curbed with Sandalwood.

Sandalwood is known for its cooling effect on people’s health. Sandalwood is widely used as an external application to soothe irritated skin cells resulting due to psoriasis, eczema, and allergy. Women regularly use sandalwood to get youthful and radiant skin. Skin scrubs, face masks, and soaps routinely use sandalwood as one of their core ingredients. Sandalwood has antiseptic properties, making it an ideal skin application to prevent wound infections.

The cooling effect of sandalwood is not only limited to physical health but also extends to one’s mental health. Sandalwood soothes tired nerves and overactive brain cells to bring about a state of mental calm. Ayurvedic treatment for anxiety, anger disorders, and mood swings may involve the liberal use of sandalwood-based medicines. Sandalwood also promotes mental relaxation by lowering unhealthy spikes in one’s blood pressure levels.

Sandalwood is a potent antibiotic agent that fights many infectious agents. Ayurvedic physicians often prescribe sandalwood as an anti-viral, anti-bacterial, and anti-fungal agent. Sandalwood also finds its utility as an anti-septic agent to prevent the festering of wound infections.

Sandalwood is known for its cooling effect on almost every cell of the human body. People who undergo treatment for blood purification are often prescribed sandalwood-based medicines. The anti-inflammatory, anti-oxidant, and fever-reducing capacity of sandalwood can be attributed to its cooling effect.

Ayurvedic physicians may also prescribe Sandalwood for sexual disorders, urinary troubles, liver illnesses, and digestive dysfunction. Almost all the information available on the Ayurvedic properties of Sandalwood is backed by medical research. However, each person may respond differently to sandalwood-based medication.

Your doctor may prescribe sandalwood in the form of oils, pastes, creams, and powders for external application. Oral consumption of sandalwood finds lesser practical application than its external usage. The dosage and method of usage of sandalwood may vary from patient to patient. Speaking with an Ayurvedic doctor before using any sandalwood products is advisable to know about their suitability and side effects.

Sandalwood products are generally deemed safe and will not cause harmful side effects. Patients may contact their Ayurvedic doctor to know more about the possible complications of using sandalwood medication.

Yoga has since long enjoyed a deep-rooted connection with Sandalwood, especially sandalwood oil. Let us know more about the benefits of using Sandalwood oil while practicing Yoga.

Meditation is an integral part of ancient Yogic practices and is one of the means to nourish spiritual health. In the olden era, knowledgeable men like sages and hermits often spent their time performing meditation and other spiritual activities. They frequently applied sandalwood oil to their bodies or spread its fragrance in the room, where they meditated with a diffuser. Using sandalwood paste on the body is an age-old tradition among Buddhist and Hindu monks.

Sandalwood helps people attain spiritual enlightenment by adequately stimulating their chakras. People often apply sandalwood paste on their forehead to stimulate the third eye chakra that invokes spiritual energies. Sandalwood is also known to open the base chakra that instills a sense of trust and confidence in one’s abilities. (CLICK HERE to learn about chakras).

Buddhist monks often sat in temples or praying shrines constructed using sandalwood. This allowed them to breathe in the subtle fragrance of sandalwood, which would unwind their mind, allowing them to meditate easily. The monks also burnt sandalwood incense sticks to stimulate their subtle senses while meditating. The burning incense sticks were also symbolic of igniting negativity and instilling one’s spiritual self with positive vibrations.

It is not uncommon to find the subtle and enchanting fragrance of sandalwood lingering in Yoga studios. People practicing Yoga at home may also prefer the soothing scent of sandalwood oil or incense sticks as they stretch and twist their bodies in various Yoga postures. Performing the Yoga postures mechanically alone does not suffice. One must pour their soul and heart into Yoga to reap its benefits.

Aromatherapy experts recommend using sandalwood oil to achieve a state of mental calm and relaxation, which are paramount to succeed in one’s spiritual journey. Spiritual enlightenment comes to those who awaken the dormant energies within themselves and connect with their innermost self. Sandalwood allows one to awaken their subtle senses and powers with its divine scent. Sandalwood also contributes to one’s spiritual progress by awakening and aligning the third eye chakra.

Celibacy is a lifestyle of complete abstinence from any sexual activity. In ancient times, men of wisdom often took the vow of celibacy to continue their spiritual journey without any distractions or responsibilities.

Celibates often used sandalwood preparations like oils, pastes, and incense sticks during their religious and spiritual activities. Sandalwood has a calming effect on one’s body, extending to the reproductive tract. Celibates benefited from using sandalwood as it helped them avoid unnatural and frequent sexual urges. This way, they could continue toward spiritual enlightenment without significant challenges.

Sages often adorned their forehead with sandalwood tilak (a dot or pattern) and smeared sandalwood paste on their bodies before they began meditating. Even today, some monks continue to follow the practice by surrounding themselves with sandalwood fragrance during their spiritual activities.

Utility Of Sandalwood During Religious Rituals

Followers of Hinduism and Buddhism use sandalwood for various religious purposes. As discussed earlier, Buddhist shrines and temples were often adorned with sandalwood furniture to allow their fragrance to permeate the premises. It is unsurprising to find a special prayer room featuring sandalwood items in Hindu and Buddhist households.

Hindus often wear a necklace made from white sandalwood beads around their neck. It is believed that praying to Lords Vishnu, Shriram, and Krishna with sandalwood beads brings prosperity and happiness. One’s prayers are answered faster if one uses a sandalwood bead necklace while performing religious rituals. However, due to the holiness associated with white sandalwood, Hindus do not wear the beads while sleeping or attending funerals.

Hindus and Buddhists often use sandalwood incense to worship their religious deities because it is considered holy and pure.

Hindus often use garlands made out of dried sandalwood wood chips to adorn the photo frames of their family members who have passed away. It is considered to be a mark of respect toward the dead.

Sandalwood incense is often burnt near the body of a deceased person to perform rituals before the funeral. The fragrance wards off insects and prevents the foul odor of the decaying body from spreading. It is common practice in Hinduism to adorn the body of their deceased relatives with sandalwood paste before cremating it. Sandalwood cleanses all the sins and allows the soul to pass on peacefully without repentance.

The use of sandalwood for religious ceremonies is also common among followers of Jainism.

White sandalwood, or sandalwood, as it is commonly known, is a rare possession that is rightfully associated with luxury. Its subtle fragrance makes it as attractive as it is functional.