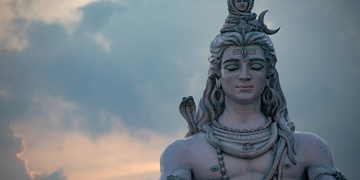 Adinath, Maha Yogi, Yogeshwar, and Adiyogi are some of the many names of Lord Shiva. Numerous legends and mysteries surround Lord Shiva, the all-powerful Hindu deity many people worship. He is the part of the Trinity, along with Lord Brahma and Lord Vishnu, that controls the cosmic universe. Lord Shiva is the destroyer who possesses the power to eradicate all evil from the Universe and the Universe itself. However, not many are aware of the deep connection that Lord Shiva has with Yoga.

Many theories and legends have established Lord Shiva as the Father of Yoga. Lord Shiva is believed to have laid down the holistic utility of Yoga for the body, mind, and spirit. Many Hindu scriptures and theories revere Lord Shiva as Adiyogi (First Yogi of the world).

All the Gods and Goddesses in heaven blessed the marriage of Lord Shiva with Goddess Parvati. One legend narrates the events that lead to the first meeting between Lord Shiva and Goddess Parvati. Lord Shiva was lamenting the loss of his first wife, Goddess Sati, at that time, and young Parvati was a princess of the mountain. Parvati would see that Lord Shiva just sat in a cave doing nothing. He refuted her repeated attempts to engage in any conversation. Eventually, after a lot of dedication and patient wait, Parvati got Lord Shiva to agree to become her Yoga teacher.

Lord Shiva’s indifference, discouragement from others, and the painstakingly slow progress in communicating with him were the struggles that Parvati was willing to undergo to learn Yoga. Similarly, every Yogi faces obstacles and some backlash when they embark on their spiritual journey. Remaining undeterred and pursuing a higher being of spiritual existence is the only way to emerge victorious.

The Journey Of Saptarishi

Lord Shiva descended to the Earth and assumed the form of Adiyogi to spread the knowledge of Yoga. One legend has it that as Adiyogi, Lord Shiva would spend most of his time practicing various forms of Yoga, including postures, meditation, and breathing exercises. The Saptarishi were great men who had mastered the different religious and spiritual practices. People revered the Saptarishi, who then went to Lord Shiva requesting that he teach them the art and techniques of Yoga. After mastering Yoga, each Saptarishi traveled to different parts of the world to spread their knowledge to the others.

According to another legend, Lord Brahma created the Saptarishi with the ultimate aim of spreading the knowledge of Yoga far and wide. The Saptarishi learned from Adiyogi himself and traveled the world to teach Yoga to others. The Yoga lessons were kept secret and supposedly conducted along the banks of the Kanti Sarovar lake in the holy Indian city of Kedarnath.

The event of Lord Shiva sharing his knowledge with the Saptarishi was the first-ever Yoga class the world witnessed. The night is still celebrated as Mahashivratri across many Indian regions. Ancient Yogic legends mention that the night of Mahashivratri sees a surge in the cosmic energy that every human being possesses. If one spends the night of Mahashivratri in deep meditation while maintaining a suitable Yoga posture, they will reach the highest state of spiritual enlightenment.

An interesting theory suggests that each Saptarishi learned only one aspect of Yoga and not the entire concept. Yogic texts or historical documents do not state the reason for this occurrence. All the wealth in the world cannot equate to the efforts of the Saptarishi towards popularizing Yoga. Hindu beliefs and philosophies revere the Saptarishi for being the most enlightened and aware beings who understood the true meaning of Yoga.

According to Yogic legends, Lord Shiva resided in remote Himalayan caves to practice Yoga. When he passed on his knowledge of Yoga to Goddess Parvati and the Saptarishi, he taught them a lot more than only Yoga postures. Let us look at the various forms of Yoga as per Lord Shiva’s teachings.

Lord Shiva introduced to the world the Yoga Chaturtha, the four classifications of Yoga that explore its full utility.

Lord Shiva’s Hatha Yoga focused on the purity of the body by using correct Yoga techniques. The various physical postures that Lord Shiva taught Goddess Parvati and the Saptarishi were part of Hatha Yoga. Most of the modern-day practices of Yoga follow the teachings and principles of Hatha Yoga. The teachings of Hatha Yoga portray the importance of meditation, dietary regulations, breathing techniques, physical exercise, and postural alignment in cleansing your body adequately.

The word Mantra implies a chant that people usually repeat or recite while meditating. Lord Shiva introduced Mantra Yoga to teach the concept of mental cleansing with the help of Yoga. Lord Shiva was the creator of the syllable Om, which is one of the primordial sounds of the cosmic universe.

Om is a widely used syllable in various Hindu mantras. Mantra Yoga helps improve the focus of a wandering mind, thus allowing it to pursue its true goal of enlightened living. Mantra Yoga is more profound than physical Yoga as it will enable one to explore their subconscious and elevate it to a higher spiritual plane.

Lord Shiva developed the concept of Laya Yoga as a means of attaining the ultimate aim of human life; union with the Cosmic Universe. Hindu religious teachings discuss the idea of spiritual enlightenment of human life. Laya Yoga includes meditation techniques and other spiritual activities that will help to elevate one’s life to a better spiritual plane. Laya Yoga helps activate and harness fixed energy points within the human body.

Raja is the Sanskrit word for king. The king is always the best and at the top; similarly, Raja Yoga is the best and the highest aim of Yoga. Raja Yoga is also the name of the techniques and practices that one must perform to attain bliss and harmony in life. The method of Laya Yoga assists in activating the dormant energies inside our bodies. Raja Yoga is the journey that takes these energies from their lowest point to their maximum potential. While doing so, these energies pass through various points in the body known as Chakras. Lord Shiva resides in the Chakra, where the power takes its most potent form within our body.

Many sages and scholars contributed to the study of the Yoga Chaturtha and came up with various facts and theories that helped enhance the utility of Yoga.

Lord Shiva’s Appearance And Its Connection To Yoga

A particular mystery has always surrounded the life of Lord Shiva. Everything from Lord Shiva’s appearance to his legendary valor has intrigued his devotees. Hindu scriptures narrate many legends of Lord Shiva, during which he bore different appearances.

However, the original appearance of Lord Shiva is quite mesmerizing and exudes a divine aura. All the details of Lord Shiva’s appearance have great significance, and many of them reflect the various Yogic beliefs and legends.

Lord Shiva is described as having a tall and muscular figure with three matted locks of hair. The three locks represent the intertwining of the physical, mental, and spiritual planes that comprise the human life, a principle that forms the basis of Yoga. River Ganga, which the Hindus deem holy, flows from his thick locks of hair, representing the purity and peace that Yogis always strive to achieve. A crescent moon adorns Lord Shiva’s head and symbolizes a balanced mind that Lord Shiva developed due to years of practicing Yoga.

The necklace adorning Lord Shiva’s neck is made of holy beads known as Rudraksha. The beads symbolize the strict nature of Lord Shiva, which is also reflected by the strict rules of the Cosmic Universe. Lord Shiva also drapes the Vasuki Naga (a serpent) in three coils around his neck, each coil representing the past, present, and future, respectively.

Lord Shiva carries a Trishul, an instrument having three sharp ends, one end representing knowledge, will, and action. Lord Shiva’s Trishul symbolizes his most extraordinary powers, which reflect in the fundamental teachings of Yoga. Lord Shiva’s images often show him in a serene posture, meditating peacefully. Many images of Lord Shiva also show him to be performing a divine dance.

Shiva Samhita is an ancient book that describes the utilities of Hatha Yoga in great detail. The book’s origins trace back to the era of 1500 B.C., but its author remains unknown. Shiva Samhita has five chapters that explain the subtle ways in which Yoga nourishes human life.

The author of Shiva Samhita has written the book as if Lord Shiva were communicating about Yoga with Goddess Parvati. (CLICK HERE to know more on Shiva Samhita)

Lord Shiva is the balancing force that controls the functioning of the entire universe. He is the possessor of the omnipresent masculine and feminine energies. Like all the creations of the Universe, Lord Shiva has a deep connection with Yoga. Dedication towards Yoga is dedication towards Lord Shiva himself!