The Complex Simplicities Of Asceticism

You are here:
AsceticismReligionsSantosh Yoga Institute

Asceticism is a discipline that involves a departure from most of the worldly and material pleasures and resigning to a simple lifestyle. The main aim of pursuing ascetic living is to achieve one’s spiritual or religious goals. Asceticism is inclusive and does not discriminate based on religion, caste, gender, or other factors.
Ascetic living comes with many restrictions, including staying away from one’s family with frugal resources, wearing simple clothing, and devoting a lot of time to spiritual activities. Ironically, these restrictions give ascetics true freedom to progress along the spiritual path of life. Asceticism is not for everybody, for it requires a particular discipline and dedication.
The practice of Asceticism has been around since time immemorial. Let us delve deeper into the history of Asceticism and learn more about this unique discipline of life. Asceticism has been around for more than several centuries and is practiced by people of various religious ideologies. Ancient religious literature shows that Asceticism was more commonly practiced in the olden era than in modern-day practices.
Christians belonging to the early Church were known to pool their resources and follow a simplistic lifestyle. Their way of living may also be known as a way of Asceticism.
Ascetics often resorted to living away from the society in jungles and mountains of the desert to avoid any disturbances. They practiced meditation and other spiritual activities while surviving on mother nature’s offerings. To this day (as of 2022), there are various Hindu and Buddhist monks residing in the mighty Himalayas who survive on nothing but water for years together. People had a deep respect for Ascetics even though the latter had disconnected themselves in every way possible from the world. Yogi, Sanyasi, Fakir, Monk, and Nun are some terms that came to be associated with the practice of Asceticism across various religions.
While many Ascetics lived away from civilization, several of them took upon themselves the task of serving the Almighty. They preached the importance of religious and spiritual practices and how they would help the common folk connect better with God.
Every religion has its history associated with Asceticism. Though these historical facts vary based on the core of each faith to which they belong, the undertone of the practices of Asceticism remains constant everywhere. Let us know more about the take of Asceticism as per different religions.

Practise Of Asceticism Across Various Religions

Religion held a stronger hold on people’s minds in the olden days compared to the modern era. People followed religious teachings and led their lives by them. Asceticism was one such discipline that some people would follow to have an enriching spiritual experience. Here is a glimpse of how Asceticism is practiced among various religions.

The Hindu way of Asceticism involves complete detachment from societal traditions and practices. Yogi, Muni, and Sanyasi are the terms used to address practitioners of Asceticism in the Hindu religion. People who practice Asceticism resort to observing strict fasting, a life of celibacy, and total surrender to the Almighty. They may adorn simple clothing in white or saffron color to signify their choice of living. Their foreheads may often bear a mark made from a special saffron paste or from gray ash that is a remnant of holy rituals like a havan (havan is a Hindu ritual that involves lighting a fire deemed sacred). They may wear a necklace made from holy beads known as the Rudraksha. Additionally, the Yogis may spend their time following a strict schedule that involves praying, meditating, reading from spiritual texts and preaching its importance to the common folk, and often performing Yoga to retain a healthy mind and physique. 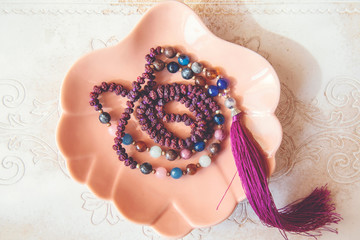 Followers of the Jain dharma (religion) are deeply respectful towards their religious practices and follow them with great devotion. The concept of Diksha prevalent among the Jains is a form of Asceticism practiced to attain a higher spiritual well-being level. Individuals as young as 5-6 years old have taken to the path of Diksha by renouncing worldly pleasures.
The word Diksha means including a person into a higher religious sector by a spiritual Guru, which is considered a pathway to spiritual progress. People who walk this path wear only simple white clothing, live a life devoid of any luxuries, like the television, mobile phones, or the internet, and even avoid using bath products. Jain monks who adopt the Ascetic lifestyle by adorning white clothes belong to the Svetambara sect of Jainism. Another sect of the Jain religion is the Digambara sect, which is governed by a different set of religious rules than the Svetambaras. People of the Digambara sect who turn to Asceticism are known to shed the use of clothing entirely or keep it minimal.
Jainism believes in treating Digambara and Svetambara Sadhus (Ascetics) with great respect and honor. 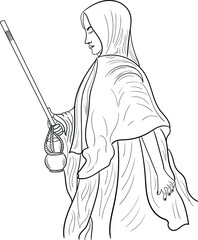 The Buddhist community is well-known for living peacefully and cordially in society. The Buddhist monks take these values to a higher level and lead an ideal life of an Ascetic, along with their spiritual beliefs.
Siddhartha Gautam was a prince living a life of luxury when he got a reality check of the misery and poverty that afflict the commoners. Moved by the sorrows of his subjects, prince Siddhartha Gautam gave up his former life to walk down a path of simple living with minimal resources. Siddhartha Gautam became Gautam Buddha, the founder of Buddhism.

Historical documents reveal that Gautam Buddha experimented with a severe form of Asceticism where he starved for an extended period and was soon reduced to skin and bones. Having realized that this is not the path to spiritual enlightenment, Gautam Buddha discarded his Ascetic practices and chose a mid-way path between extreme indulgence and extreme self-neglect. The Buddhist way of Asceticism involves meditation, studying religious and spiritual scriptures, and practicing humble living.

Traces of Ascetic practices are found in the literature of Islam, Christianity, and Judaism. However, it is more common to encounter people of Hindu, Buddhist, or Jain faith who follow Asceticism.

It is common knowledge that Ascetics live a simple life away from the public eye to be able to practice spiritual activities. There are a few unwritten rules that Ascetics are expected to follow. These rules act like self-imposed restrictions that make it easier to attain a state of material detachment toward worldly pleasures. 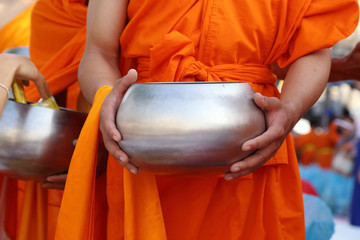 These are the primary restrictions that a person who practices Asceticism is expected to follow. Some people may resort to a stricter lifestyle that involves living in natural habitats like the forest and the mountainside of the desert.
Unnatural Asceticism is a concept that existed in the olden days when people resorted to extreme behaviors to undergo complete detachment from the material world. This included wearing clothes made of animal hide or discarding clothing completely, eating sparsely, devoiding oneself of sleep, and often inflicting physical pain. The practice of Asceticism in this manner is still prevalent but waned gradually due to its extreme nature.

The philosophies of several religions say that the human body is perishable, but the soul has to undergo the cycle of death and reincarnation. The soul is indestructible and may take a different physical form at each birth. Ancient religious scriptures state that spiritual enlightenment is one way to unite with the cosmic universe and become one with the Lord Almighty. Oneness with Him releases the soul from the endless cycle of birth and death and allows it to attain a state of Moksha (complete salvation).
Many people who practice Asceticism have one goal in mind: to attain Moksha. They believe that Asceticism is the key to walking down the difficult path toward the glorious Moksha.

Asceticism was more common in the bygone era than it is today. In the olden days, people turned to Asceticism to find their spiritual calling and attain tranquility of mind. The reasons for today’s youth to turn to Asceticism are pretty different.
The stress, competition, and societal pressures of modern-day life are getting the better of people. Ascetic living is a path that reduces the painful aftermath one has to face to survive in the highly charged atmosphere of modern-day society. Youth from varied socio-cultural backgrounds are turning to Ascetic living to unburden themselves and feel closer to God.

Asceticism is a tool that can shape the brightest futures if one is willing to walk the extra mile! While it may seem like a cakewalk, the life of an Ascetic is quite tricky and requires a lot of patience, dedication, and spiritual devotion.

How Yoga Helps Increase Productivity In The Workplace
January 5, 2023